A web based mission control framework.

Open MCT is a next-generation mission control framework for visualization of data on desktop and mobile devices. It is developed at NASA's Ames Research Center, and is being used by NASA for data analysis of spacecraft missions, as well as planning and operation of experimental rover systems. As a generalizable and open source framework, Open MCT could be used as the basis for building applications for planning, operation, and analysis of any systems producing telemetry data.

Please visit our Official Site and Getting Started Guide

Based on the "Misc" category.
Alternatively, view Open MCT alternatives based on common mentions on social networks and blogs.

Close all those tabs. Zigi will handle your updates.

Zigi monitors Jira and GitHub updates, pings you when PRs need approval and lets you take fast actions - all directly from Slack! Plus it reduces cycle time by up to 75%.
Promo www.zigi.ai

* Code Quality Rankings and insights are calculated and provided by Lumnify.
They vary from L1 to L5 with "L5" being the highest.

Do you think we are missing an alternative of Open MCT or a related project?

Open MCT (Open Mission Control Technologies) is a next-generation mission control framework for visualization of data on desktop and mobile devices. It is developed at NASA's Ames Research Center, and is being used by NASA for data analysis of spacecraft missions, as well as planning and operation of experimental rover systems. As a generalizable and open source framework, Open MCT could be used as the basis for building applications for planning, operation, and analysis of any systems producing telemetry data.

Please visit our Official Site and Getting Started Guide

Once you've created something amazing with Open MCT, showcase your work in our GitHub Discussions Show and Tell section. We love seeing unique and wonderful implementations of Open MCT! 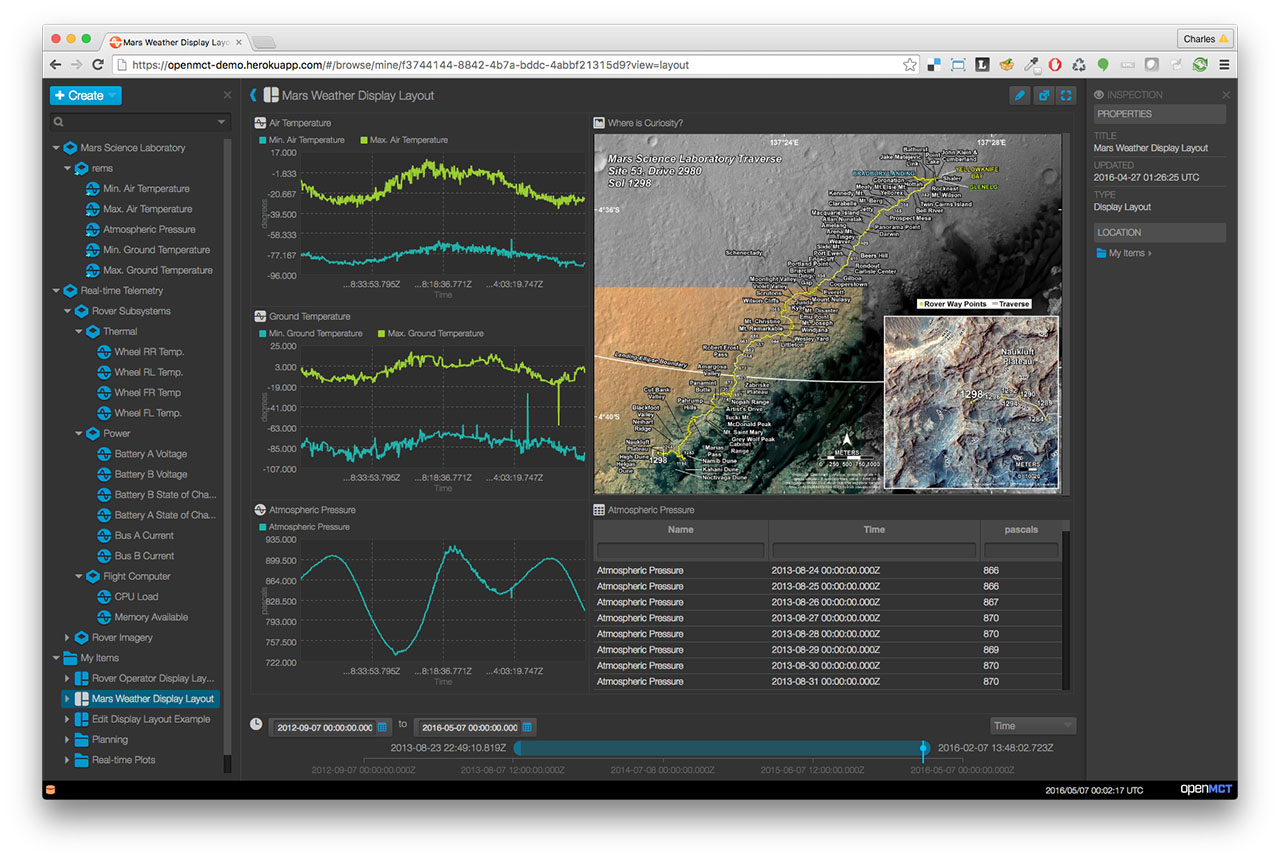 Building and running Open MCT in your local dev environment is very easy. Be sure you have Git and Node.js installed, then follow the directions below. Need additional information? Check out the Getting Started page on our website. (These instructions assume you are installing as a non-root user; developers have reported issues running these steps with root privileges.)

Open MCT is now running, and can be accessed by pointing a web browser at http://localhost:8080/

The clearest examples for developing Open MCT plugins are in the tutorials provided in our documentation.

We want Open MCT to be as easy to use, install, run, and develop for as possible, and your feedback will help us get there! Feedback can be provided via GitHub issues, Starting a GitHub Discussion, or by emailing us at [email protected].

For more on developing with Open MCT, see our documentation for a guide on [Developing Applications with Open MCT](./API.md#starting-an-open-mct-application).

This is a fast moving project and we do our best to test and support the widest possible range of browsers, operating systems, and nodejs APIs. We have a published list of support available in our package.json's browserslist key.

If you encounter an issue with a particular browser, OS, or nodejs API, please file a GitHub issue

Open MCT can be extended via plugins that make calls to the Open MCT API. A plugin is a group of software components (including source code and resources such as images and HTML templates) that is intended to be added or removed as a single unit.

As well as providing an extension mechanism, most of the core Open MCT codebase is also written as plugins.

For information on writing plugins, please see [our API documentation](./API.md#plugins).

Our automated test coverage comes in the form of unit, e2e, visual, performance, and security tests.

Unit Tests are written for Jasmine and run by Karma. To run:

The test suite is configured to load any scripts ending with Spec.js found in the src hierarchy. Full configuration details are found in karma.conf.js. By convention, unit test scripts should be located alongside the units that they test; for example, src/foo/Bar.js would be tested by src/foo/BarSpec.js.

The e2e, Visual, and Performance tests are written for playwright and run by playwright's new test runner @playwright/test.

To run the e2e tests which are part of every commit:

To run the visual test suite:

To run the performance tests:

The test suite is configured to all tests localed in e2e/tests/ ending in *.e2e.spec.js. For more about the e2e test suite, please see the [README](./e2e/README.md)

Each commit is analyzed for known security vulnerabilities using CodeQL and our overall security report is available on LGTM. The list of CWE coverage items is avaiable in the CodeQL docs. The CodeQL workflow is specified in the [CodeQL analysis file](./.github/workflows/codeql-analysis.yml) and the custom [CodeQL config](./.github/codeql/codeql-config.yml).

Each test suite generates a report in CircleCI. For a complete overview of testing functionality, please see our Circle CI Test Insights Dashboard

Our code coverage is generated during the runtime of our unit, e2e, and visual tests. The combination of those reports is published to codecov.io

Certain terms are used throughout Open MCT with consistent meanings or conventions. Any deviations from the below are issues and should be addressed (either by updating this glossary or changing code to reflect correct usage.) Other developer documentation, particularly in-line documentation, may presume an understanding of these terms.

Support for our legacy bundle-based API, and the libraries that it was built on (like Angular 1.x), have now been removed entirely from this repository.

How do I know if I am using legacy API?

You might still be using legacy API if your source code

What should I do if I am using legacy API?

Please refer to the modern Open MCT API. Post any questions to the Discussions section of the Open MCT GitHub repository.


*Note that all licence references and agreements mentioned in the Open MCT README section above are relevant to that project's source code only.

Do not miss the trending, libraries, news and articles with our weekly report.